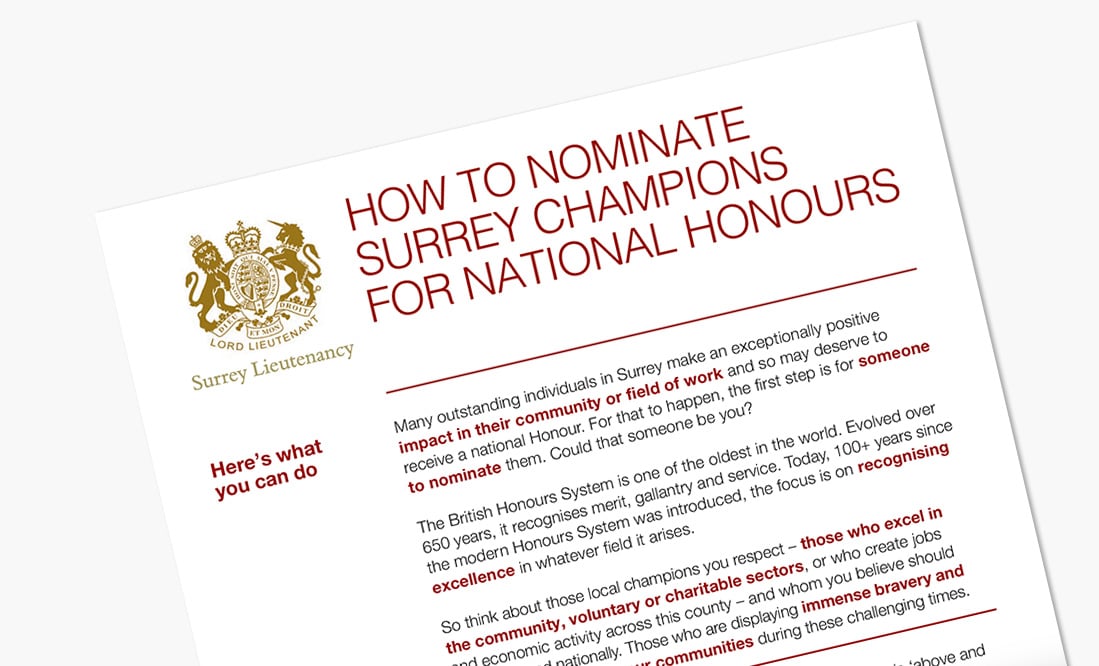 The Honours System offers public recognition to people in all walks of life and all sections of society who have given quite exceptional service and made a difference in their community or in the country. There are several different types of award, each one recognising a different type of contribution (click here).

The British Honours System is one of the oldest in the world. It has evolved over 650 years and today recognises merit, gallantry and service. Honours lists are published twice a year at New Year and in mid-June on the date of The Queen’s official birthday. (Please scroll down to see the names of the Surrey residents recognised in the latest Honours list.)

Anyone can receive an award if they reach the required standard of merit or service, and honours lists contain a wide variety of people from different backgrounds. Anyone can nominate someone for an award but it is important to note that longevity in a position is not sufficient in itself and that honours are not usually awarded after someone has retired.

Access to the required form and further information can be obtained by clicking here.

To support a nomination, it is essential to source and submit several strong letters of recommendation, from people who know at first hand about the work that has been done by the individual being nominated.

It is important to recognise that a nomination can take around 18 months to go through the vetting process, from the point it is submitted to the Cabinet Office. The fact of nomination should be kept strictly confidential as sadly a relatively few people can be honoured and it is best to avoid disappointment. If a nomination proves unsuccessful. it is sometimes possible for the Lord-Lieutenant to arrange some other form of recognition, as a ‘thank you’ for exceptional service.

Dames Commander of the Order of the British Empire (DBE)

Commanders of the Order of the British Empire (CBE)

Officers of the Order of the British Empire (OBE)

Members of the Order of the British Empire (MBE)

Medallists of the Order of the British Empire (BEM)